To read an update of the ministry, check out our May 2022 newsletter and/or read our Spring Fundraising appeal.

Once again we are inviting you to support us in our work at the University of Toronto. Through Wine Before Breakfast and Graduate Christian Fellowship, we challenge, mentor, and enable students to think, work, and live as Christian disciples in the academy and in their professions. Through wrestling with Scripture and difficult topics, we invite people into radical Christian discipleship, inviting them to rest in the hope of Christ and to participate in God’s work of bringing justice.

The following words from Stephanie, an alumna of the ministry, give an example how God has worked in the past, and continues to work though this ministry into the present.

“I can’t express how much I have enjoyed staying connected via the weekly newsletter and the invitation to virtual gatherings during CoVid19.
This week’s topic [on politics] takes me back to a similar discussion held while I was on campus and there was a federal election. It was formative in my early walk as a Christian and I keep going back to those nuances I took away from that session each time I consider an issue presented in the political fora.
Although I am not I’m able to be present in it, it’s an important reminder to me that my fellow brethren are out there contemplating life with the lens of their faith.”

Grateful for how God uses this ministry to bless people’s lives, from generation to generation of students, we want to thank you for your support and participation, as well as invite you to partner financially with us in the shaping of a vibrant Christian community and witness at the University of Toronto and the wider city.

For more detailed update about this past fall at Graduate Christian Fellowship and Wine Before Breakfast, including how we’ve been meeting in person, see the newsletter.

InterVarsity’s Emerging Scholars Network recently published a helpful post about imposter syndrome and how it gets in the way of our trusting God fully. More specifically,

The core problem isn’t that we feel bad about ourselves but that Imposter syndrome distracts from action. Fear and inadequacy are like weights around our ankles preventing us from running full speed by keeping our eyes fixed on our inadequacy. As long as we’re preoccupied with our inability rather than God’s ability, we will live a life of fearful restraint and small goals, never plunging deep into the waters of faith. Imposter syndrome stands between us and following God’s call, convincing us we’re not good or able enough.

To hear more about the challenges of imposter syndrome, I encourage you to read the full article: Imposter Syndrome, The Bible and Grad Students – Emerging Scholars Blog.

The following are prayers said as a formal way of saying good-bye to the ministry space at Wycliffe that Wine Before Breakfast and Graduate Christian Fellowship used for twenty-five years. 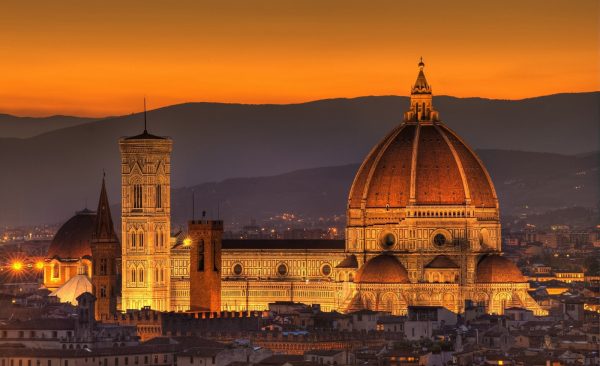 While I know I look quite young (many a bartender has needlessly questioned the integrity of my state ID), I have lived a pretty full 28 years of trying to figure out what it means to follow Jesus. What does loving our neighbor as ourselves look like in our personal and professional lives? Trying to answer that question has taken me to Chicago, El Salvador, and Italy, down a winding circuitous path to academia, and now to GCF on Thursday night, where you’ll get to hear some scattered bits and pieces of that journey. Looking forward to sharing with you all!

This week at GCF we’ll be chowing down on some delectable delicacies starting at 6pm and engaging in a conversation about disciplinary epistemologies beginning around 7pm. Our conversation about how we are taught to think will begin with presenters briefly sharing about how their discipline has taught them to think followed by your reflections and questions. We’ll end the evening with prayer, more food and dishwashing.

This week at GCF we’ll be learning about “MoveIn”

“The Word became flesh and blood, and moved into the neighborhood.”

I have heard about MoveIn from several GCFers over the years and I’ve been thinking for a while that it would be a good thing to learn about and discuss at GCF – I just needed to find someone who could talk about it! Well this week Jordan and Danielle have agreed to come, tell us some stories and have a conversation with us about their experiences living in St. James Town and other MoveIn communities.

Are you interested in prayer, incarnational living, and the poor?

MoveIn is a movement of regular Christians prayerfully moving in among the unreached, urban poor. Locally and globally.

It’s a movement that I joined. I lived as part of the MoveIn team in St. James Town (Parliament and Wellesley) for 3 years. Danielle, my wife, joined the team after we were married in 2014, but before that, when living in Ottawa, she was part of the MoveIn team on Donald Street. Since then, Danielle and I moved to England for a year and have now moved back to where we currently live — Wycliffe College.

We have much to share about our experiences, mostly good, though some difficult things too.

I hope you’ll join us, and bring a friend, to hear Jordan and Danielle’s story.

The story was going a certain way.
Sure, there were some detours along the way
and things didn’t always go totally as expected,
but the overall plot remained clear.

Truth is, everything is about home.
Really, when it comes right down to it, what else is there?

But sometimes these stories meet a dead end.
Literally.

END_OF_DOCUMENT_TOKEN_TO_BE_REPLACED 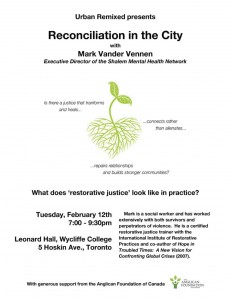 Reconciliation in the City

Mark is a social worker who has worked extensively with both survivors and perpetrators of violence. He is a certified restorative justice trainer with the International Institute of Restorative Practices and co-author of Hope in Troubled Times: A New Vision for Confronting Global Crises (2007).

In humility and gratitude, we acknowledge that the land on which we gather is traditional territory of the Huron-Wendat, Haudenosaunee and Anishinabek Nations, and the Mississaugas of the Credit First Nation.